- November 12, 2011
There are two ways to install Google Chrome Browser in Fedora. The recommended way is to navigate to the Google Chrome site at http://www.google.com/chrome, the site will automatically detect your operating system and display the appropriate download for you. The installation screenshot is listed below.
The alternative way is using Google Linux Repository. However, Google has decided to discontinue Google Pack which host the repository of third party software. You can visit the Google Pack site for further information. Some users encounter problems when using yum to install Google Chrome. However, I did not encounter any problem during my testing. The details of using yum to install Google Chrome is also listed below. But I am not certain that the repository will remain there. If you encounter any problem, use the recommended method.
Installing Google Chrome (Recommended Method)
First visit the site http://www.google.com/chrome. The site will detect you operating system and display the appropriate download page as below. 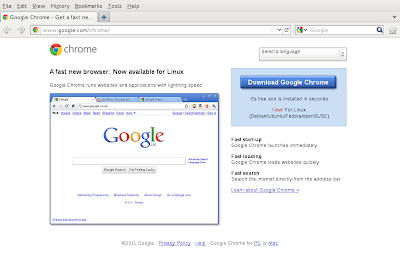 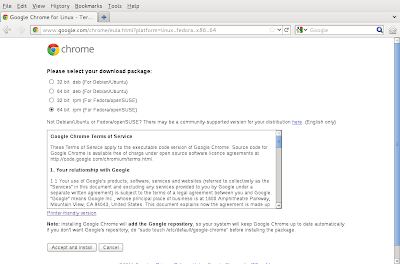 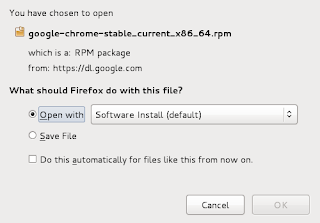 If you are using Firefox browser, it will display a box as above. Click "OK".

Click Install.
Depending of which software you have installed previously. You may received an additional box that inform you to install additional dependencies software. Install any dependencies software as per recommendation. The installation will complete after a while. To confirm, Google Chrome is located under Applications >> Internet.
Installing Google Chrome using Yum
The first thing you need to do is to configure a Google repository file. Create a plain text file called google.repo as follows:
[google64]
name=Google - x86_64
baseurl=http://dl.google.com/linux/rpm/stable/x86_64
enabled=1
gpgcheck=1
gpgkey=https://dl-ssl.google.com/linux/linux_signing_key.pub
You could also download a copy from here:google.repo.
Place the file under /etc/yum.repos.d. (You need to use sudo command to move this file)
Finally, you can install Google Chrome using the command:
$sudo yum install google-chrome-stable
If you like to test the beta version or unstable version use the following command:
$sudo yum install google-chrome-beta
$sudo yum install google-chrome-unstable