- August 22, 2018
This is a basic introduction to Docker for Mac. Before we starts to understand Docker, we must know about virtual machine. Readers for this blog is familiar with VirtualBox and Parallel. Recently, we are testing various new Linux distribution via virtual machine. So far we have installed more than 10 different flavor of Linux distribution. It takes up more than 80GB of hard disk space.  Since, a lot of them are different flavor of Debian/Ubuntu distribution, there are a lot of repetitive installation.

We are not going to show the standard layered chart. If you preferred the official layered chart, please check out the tutorial from docker. The chart below is an example of what happened to by Macbook Pro.

So instead of virtual machine or virtual OS, we have virtual app. This is the basic concept of Docker.

To explore the details on Docker for Mac, please refer to this site:https://docs.docker.com/docker-for-mac/ . This site contains everything about Docker for Mac. However, we will go through them on a gradual progressing pattern.

Now that you have Docker installed in your system. You have a little whale on your top menu bar. Lets try some basic command. Docker uses terminal heavily, please fire up your terminal.

Use the following command to check the version of various component of Docker:


The result should be something similar as below:

To test if your Docker is running properly use the command below:

You should received the following message 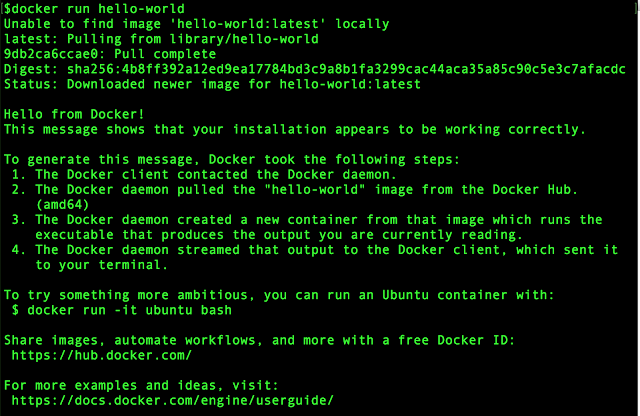 A docker image is an image of an app.  When we execute the command, docker will check if there is any image in your local repositories that are named hello-world. If docker can't find any, it will pull the image from the main docker server and run it. If we run the same command again, you will received similar message: 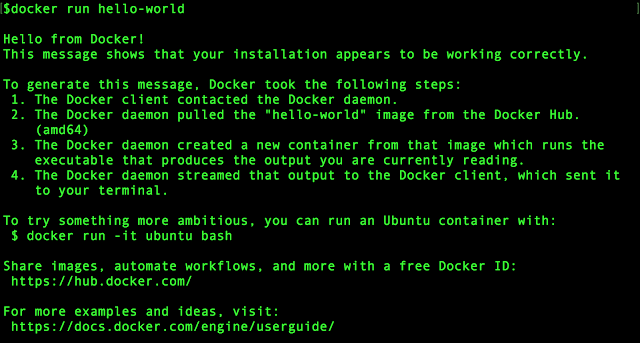 Please note that the message unable to find image 'hello-world:latest' locally disappear. This is because we have previously downloaded the image. Docker just run the same image again.


So lets get acquainted with 2 terms, Docker Image and Docker Container. A Docker Image contains an app. It is similar to the dmg file we download for Mac app. Usually, we run an image just like running an app.  Although technically, we can include more than one app in an image, but this defeat the purpose of isolation. Docker recommended that we put one app per image.

Now lets run the following command to check our container:

To check all containers including spent/used containers:

Now the system show 2 used container as below:

Every time we run an image it will create a new container.

When we run the image, we do not give the container any name. By default, the system will give each container a different random name if we fail to provide a name while running it.


Now there is no container left as shown below:

Now lets check out any images we stored locally. Use the command:

We have one image stored locally. Similarly, we can identify the image using image name or image ID.

To remove the local image, use the command


There will be no image left.

Lets recap what we have learn:


We will stop for now. In the next post, we will look into images and pulling images.