- August 24, 2018
For second day of Introduction to Docker, we will learn how to run the docker test app with name option. After that, we discuss about pulling an actual docker application and we will learn the naming convention of docker image.

We start by running hello-world app without any option. Run the test app as follows:

The result should be as follows:

We then remove the container using the ID or the name cranky_brahmagupta. This name is created randomly by the system if we failed to supply a name.

Now, we remove the container as follows:

To run the container and supply a name, we use the option --name follow by a single space and the custom name. See example below: 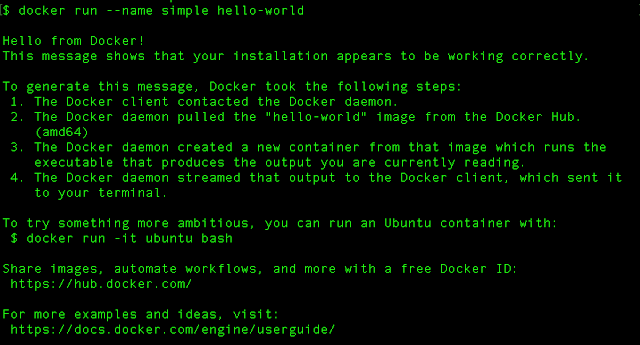 The result is as follows:

As we have mentioned in the previous post, a docker image contains a single app. Docker.com supply many apps such as Wordpress, mySQL, MongoDB, Python, CentOS, Alpine (light-weight Linux) and Ubuntu.

We can download these image first before running it. We use the pull command to download image without running it.

We can try pulling other OS such as CentOS and Alpine. As we can see, Alpine has the smallest image size whereas CentOS takes up 200MB.

Docker uses tag to further differential different image with a same name. For example, if you search for python image for docker, it contains many version of python.

If we pull python:latest, the image will include both python2  and python3. We can download a specific version of python using different tag. On the docker for python webpage, there are many tags. The screenshot below is just a portion of the tag. 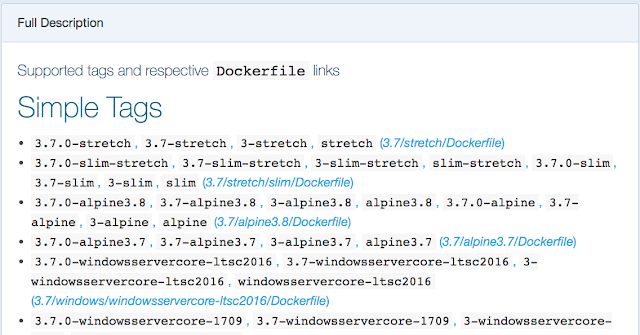 We can even download older version of Python using the tag.

Now, lets pull the slim version of Python 3 using the command below


Resulting screenshot is as follows:

This image is much smaller than the default image python:latest. The default version contain both Python2 and Python3. The slim 3.7 version only contain Python 3.7 without any additional libraries.

Once you have your own docker account, you can create your own docker image. Let's say you have created your own version of hello-world. To identify and differentiate your version against the official version, we name the image as <username>/hello-world. So to pull an image not developed by Docker.com, we use the naming convention mentioned above.

Now we pull Tensorflow as follows:

Please note that all these images takes up hard disk space. To check how big the image size, use the command below:

We can remove unused docker image using the following command: