- September 03, 2018
On day 5, we will focus on running base OS such as ubuntu, CentOS and Alpine. We will also learn how to reuse exited container. Finally, we will learn how to convert the container into images.

To run base OS in a container, use one of the following command:

Next, we would like to perform system update and then install Python3 using the following command:

We can explore various base os. Base os are the os which the docker image is build on. Many OS vendor are racing to build the base os with the smallest size.


Most OS will default to shell. however, for Fedora we must specify the shell path. Exit the base OS when done.

In the last section, we have install Python 3 on Ubuntu. Unfortunately, we have exited the container. Do we need to rebuild Python 3 again? The answer is NO. We can continue exited container using the command syntax below:


So for the previous exercise, use the following command:

We can continue to install pip and add 2 Python library Numpy and Scipy. 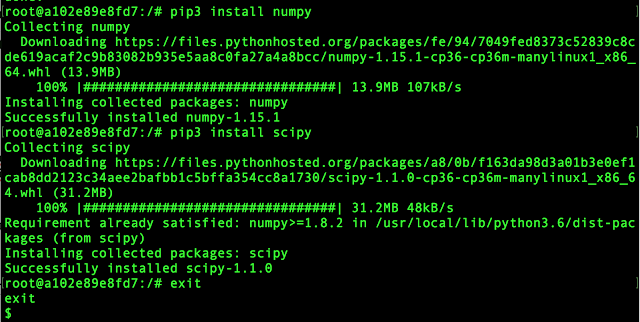 We can also continue with any exited container using docker start command.

Following up with the previous example, if we are satisfy with the installation, we can convert the container into image. This way when we prune our container, our image is still being preserve.

Using the following command to convert the container into image:

In the next session, we will learn how to build a docker image using docker file.